‘Golos’ coordinator in Irkutsk was dismissed from university after denunciation

Alexei Petrov, the coordinator of ‘Golos’ movement in Irkutsk region, as well as political analyst, was fired from the post of deputy dean of history faculty of the Irkutsk State University (ISU). Officially Alexey Viktorovich was dismissed for disciplinary violation.

The coordinator of Irkutsk branch of National Liberation Movement (NOD) Sergey Poznikov filed a complaint against Petrov with the Prosecutor's Office. The plaintiff referred to allegedly numerous cases of absenteeism requesting to bring Petrov to justice.

‘Based on these claims the Prosecutor's Office carried out an investigation at the ISU, which resulted in dropping the charges for the suspected violations of labor laws. As far as I know, my name was not mentioned in the Prosecutor’s decision, but they [the university administration] decided to do so and they did,’- said Alexey Petrov to the press agency ‘Interfax-Siberia’.

Moreover, under the ISU claim the Prosecutor’s Office ordered Alexei Viktorovich Petrov to pay back to the university about 100 thousand rubles of salary for 75 days of ‘absenteeism’ during the period October 2013 to March 2016.

On November 16, about 200 people, including staff, students and alumni of ISU held a demonstration in support of Petrov. 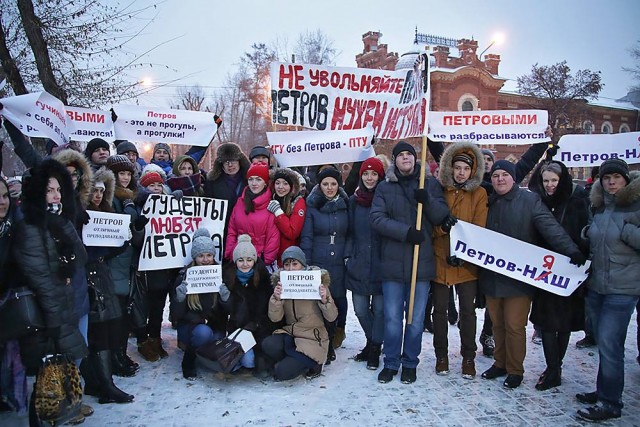 The demonstration in support of Petrov. Photo: Dmitry Dmitriev, 11/16/2016

‘My employment record book has been brought back directly to my office. It holds a record saying I was fired for absenteeism. This decision was taken by the Irkutsk State University rector, though the trade union of State University recommended to abstain from the dismissal. It is a matter of conscience of those people. I do not feel anger at anyone’, - A. Petrov said on Wednesday to approximately 100 participants of the demonstration in support of Petrov at the square near the monument to Alexander III in Irkutsk.

In response, Pozdnikov told the news agency ‘Irkutsk line’ that Petrov ‘was brainwashing students with hostile ideology’. Moreover, S. Poznikov made it clear to the media that the complaint against the ISU associate professor was not the last one.

In the morning of November 16, at the Irkutsk State University the teachers’ trade union voted unanimously against the dismissal of Alexei Petrov. However, the decision of trade union is advisory in nature, as ‘Irkutsk online’ posted.

In early November, the Commissioner for Human Rights in Irkutsk Region Valery Lukin announced that there was no evidence of disciplinary violations in case of Petrov.

Alexey Petrov had been working in the Irkutsk State University for nearly 25 years. During the demonstration in support of Petrov, he made a statement saying he was not going to change his scope of professional practice or leave the city, as he ‘always worked and would work with people’. Moreover, Alexey Viktorovich has been for years working as the ‘Golos’ coordinator in Irkutsk region.